The Armed Forces Bill returns for Report stage in the @UKHouseofLords tomorrow – along with @poppyscotland, @Cobseo & @HelpforHeroes we’re urging parliamentarians to seize this opportunity to improve the Bill and strengthen the Covenant in law: https://britishlegion.org.uk/get-involved/things-to-do/campaigns-policy-and-research/campaigns/response-to-the-armed-forces-bill     RBL Twitter Feed 22/11/21 What is the Report Stage? 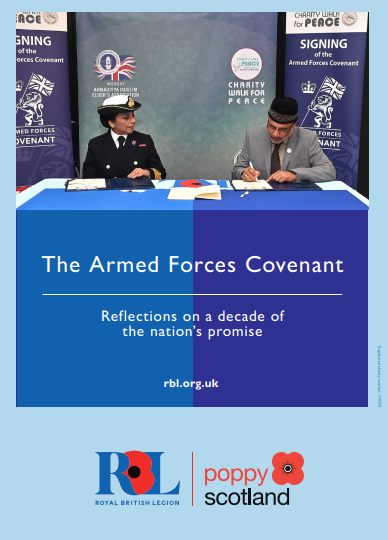 Whether through their contribution to tackling the pandemic, or the recent commemorations of D-Day and VE Day, the unparalleled contribution of those who have served in the Armed Forces continues to be shown. The Armed Forces Covenant is the government’s and the nation’s promise that those men and women – and their families – should not be disadvantaged, and that special consideration may be appropriate, such as for the injured or bereaved.

The Armed Forces Bill currently before the UK Parliament makes welcome provision for a new legal duty on public bodies to give due regard to the Covenant. However, based on our collective experience working with the Armed Forces community, the Bill does not go far enough. The new duty would only apply to local councils and some limited public bodies delivering housing, health and education. This neither reflects the reality of how the Covenant is delivered, nor the full range of issues affecting those in the Armed Forces community.

Even where services are provided locally, they are often based on national guidance. It is therefore a major gap for national government and the devolved administrations to be exempted from the duty that will be imposed on councils and others. This is compounded by the omission of important topics including employment, pensions, compensation, social care, criminal justice, and immigration from the Bill’s scope.

Now that the Bill has returned to the Commons, we urge the UK Government and MPs to seize this rare opportunity to deliver on the promise of the Covenant. Such a move would attract widespread consensus and be a fitting recognition of the ongoing service and sacrifice of our brave men and women, and the families who support them.

The Royal British Legion and leading military charities are joining together in final chance to urge the UK Government to improve the Armed Forces Bill.

Over the past few weeks, the public’s enduring support for the Armed Forces community has been demonstrated once again as millions paid their respect to the fallen and reflected on the sacrifices that serving men and women, veterans and their families continue to make during both conflict and peace. Politicians were among those to express their admiration and gratitude, and now is the time for action.

The Armed Forces Covenant is a promise by the nation that all those who serve, have served and their families will not experience disadvantage because of the unique pressures and demands of military life, and that in some circumstances, special consideration may be appropriate, such as for those who have been left injured or bereaved. The Armed Forces Bill seeks to put the promise of the Covenant on a legal footing for the first time, but whilst the majority of the public believe it is the responsibility of national government to deliver, it is exempted from the new provisions. This cannot be right when responsibility for many of the issues concerning our Armed Forces community rests with national government.

On behalf of the serving personnel, veterans and families we collectively support, the Royal British Legion, Poppyscotland, Cobseo, SSAFA and Help for Heroes urge parliamentarians to seize this last opportunity to improve the Armed Forces Bill and strengthen the Covenant in law by ensuring that national government is subject to the new Covenant duty. Now is the moment to demonstrate to the Armed Forces community that every level of government both recognises their service and sacrifice, and will act decisively to support them to lead healthy, successful and fulfilling lives.