As RBL’s Director of Music, David Cole OBE, directs our Central Band and is also the musical director of the annual Festival of Remembrance.

While watching the 1966 football World Cup on TV, David Cole was impressed by the Royal Marines’ band march at halftime. Although he couldn’t hear them, he was transfixed by the straight lines they were marching in as they played.

David then contacted the Naval Careers Office and arranged an audition. He wanted to play the tuba but the Royal Marines Music Director wanted him to train on the cornet instead, so he turned down the offer and returned to his clerical office job.

Aged 18, David returned to the Naval Careers Office where he was accepted onto training alongside the Royal Marine Commandos. The first six weeks involved marching, physical drill, shooting, and training but no music.

In the seventh week, he handed back his rifle and walked across the barracks to the school of music where he’d always wanted to be. The training was rigorous, all day playing and marching, and on the cornet. Having spent most of his life playing the tuba, he was struggling with the cornet. After his sixth-month trial, David explained to his CO that he was ready to walk away, to which the CO replied, “go and get a tuba!”

David began as a rank-and-file musician and later, he passed the corporal’s course followed by a sergeant’s one and finally, selected to be an officer. He was commissioned at the age of 30, the intervening years spent playing in orchestras, performing at ceremonies, and even recording at the famous Abbey Road Studios.

“I was proud to be a Royal Marine Musician. Other bands have a reputation – Central Band of the RAF, brilliant; the Guards Band in the Army, very good – but we always felt like an elite outfit,” says David.

Continuing to move up the ranks through lieutenant and captain, he began to take on responsibility for the performances of others, which is where he learned to arrange music, a crucial skill for the Festival of Remembrance.

In 1991, David was selected to be Music Director on the Royal Yacht Britannia. He joined the other 20 officers on board, with his own cabin, dinner cooked by the Queen’s chef every night, often joining Her Majesty and other members of the Royal family. David did tours of the Western Isles and farther afield to Russia and South Africa. He left the Service aged 50 and a few years later the Director of the RBL Central Band retired, allowing David to apply for the post.

When David first began directing the Festival of Remembrance, his role was limited to writing a few hymns as many special acts came with their own music.

Today, the event is an award-winning spectacle crafted by David and talented production teams at the BBC with incredible themes, sets, lighting and of course music.

With just one dress rehearsal on the day before the event, David prepares to the highest level, often writing two openings and endings to every piece of music so that the programme can be scheduled down to the last second.

With developments in technology, he has also moved from manuscript writing to now composing on computers which allows him to send digital files of music to the acts before the big day so that they can practice with the full orchestra in their ear.

As a result of years of dedication to the Festival of Remembrance and impeccable composition, David has been awarded three BAFTAs, two being for the Festival of Remembrance and the third for his work at the Passchendaele centenary ceremony in Ypres. Going up against the likes of Ant & Dec and Strictly Come Dancing, David never thought he stood a chance of winning his first award. As the winner was read out, the team sat still, shocked by the announcement. With no speeches planned amongst them, David was pushed to the podium and eloquently accepted the award, drawing on his experience on stage over the years. 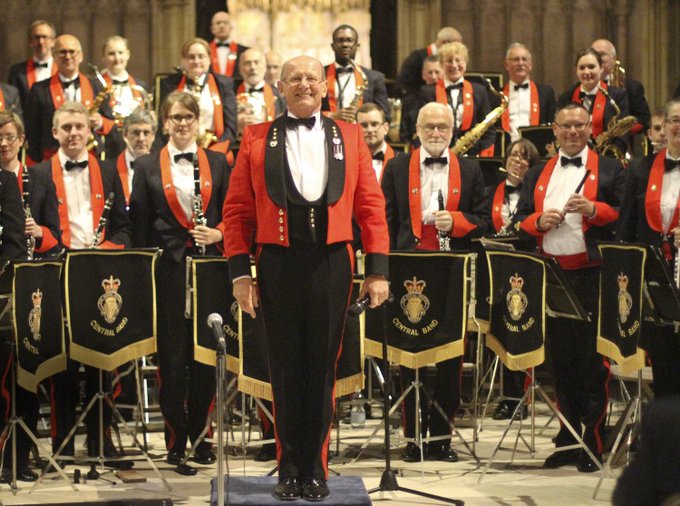 “But we don’t write shows for awards … when we have bereaved families at the Festival to honour for their supreme sacrifice, that is our main focus,” David says.

David was recognised again for his incredible services to Remembrance in 2019 when the RBL nominated him for an OBE. Having to keep the achievement a secret from the Band for so long, he gathered the musicians together on the final night on the Boudicca boat that sailed D-Day veterans to Normandy on the 75th anniversary.

The Band wondered about the announcement, dreading the thought that David could be retiring. When he had finished thanking them for all their hard work and had lulled them into sentimentality, David shocked them all with the fantastic news to many gasps of relief and laughter at his tormenting prank. The OBE was a huge honour for David, who had spent many years of his life entertaining the monarch.

The Covid-19 pandemic sadly caused all entertainment to be cancelled in 2020. David was furloughed along with millions of others across the country. With no concerts to prepare for and no rehearsals allowed to take place, David took the time to look after his family whilst productively digitising all of his music; a task that his usual busy schedule had not allowed him to do. But he also continued to compose, “because it’s in the blood, music can’t stop.”

Returning to work for important events with the BBC such as the VJ Day 75 celebrations and the Festival of Remembrance, David hoped that things would begin to return to normal but another lockdown was introduced, and all plans were once again put on hold. Thankfully, the entire band stayed safe through the pandemic, and on 19 May 2021, 47 musicians finally gathered in London for their first rehearsal in over a year. David’s dedication to music and the Armed Forces throughout his life has earned him enviable life experiences and a happy career. He shows no signs of slowing down as he begins to make plans for 2022.