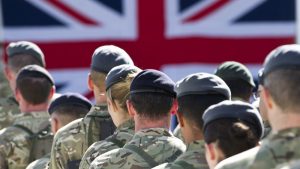 Military veterans will be guaranteed interviews for some government jobs as part of a pilot scheme to boost their employment prospects. The initiative, launched by the Office for Veterans’ Affairs (OVA) in the Cabinet Office, will start in the spring within certain departments. Veterans will be shortlisted provided they meet basic selection criteria. Cabinet Office minister Oliver Dowden said veterans have “incredible skills” needed in government.

Mr Dowden and veterans’ minister Johnny Mercer jointly oversee the OVA, which was created last July to improve support for ex-members of the Armed Forces.

Four government departments will be taking part in the project:

There will not be a time limit for those leaving the military on when they can take up the guaranteed interview offer. The offer applies retrospectively to all veterans. Previous studies have shown ex-servicemen and women face many barriers to civilian employment.

Almost a fifth of UK employers are unlikely to consider hiring ex-military personnel, according to research unveiled last October. A YouGov survey for the Forces in Mind Trust found 18% of more than 1,000 UK firms surveyed said they were unlikely to consider employing veterans, mostly due to “negative perceptions” of their former careers.

Air Vice-Marshal Ray Lock, the organisation’s chief executive, said the introduction of the scheme for military veterans to be guaranteed interviews for government jobs was a “valuable step” towards providing them with “equality of access to employment”. He said: “Negative stereotypes can prevent ex-service personnel accessing the same employment opportunities as their civilian counterparts. “Such misperceptions damage not only the individual, but also UK business.” He praised the public sector for “setting a good example” the private sector could follow.

Lewis Moore, who spent five years with the Navy, previously told BBC Newsbeat how employers struggled to see how his military skills could be useful to them. Mr Mercer, a former Army officer and now the minister for defence, people and veterans, said ex-servicemen and women are “agile, strategic and excellent team players” and “a guaranteed interview will shine a light on these skills and help boost job prospects”. Mr Dowden added: “From teamwork to problem-solving, our veterans have incredible skills and experience that employers on civvy street, and indeed Whitehall, are crying out for.”

The scheme follows last month’s announcement of a new Veterans’ Railcard that will offer discounted train travel for ex-servicemen and ex-servicewomen. The railcard – to be released on Armistice Day in November – will save a third off most train fares. It will cost £21 for a limited period, before rising to £30. The Cabinet Office said the OVA’s announcement delivers on the government’s manifesto pledge to support and invest in veterans.