The UK Armed Forces have played a key role in the fight against the COVID-19 pandemic. The military has codenames for coronavirus-related efforts at home and overseas – Operation Rescript and Operation Broadshare.

Here is what you need to know…

This is the name for the military response to COVID-19 in the UK. The Ministry of Defence (MOD) has confirmed it is the biggest ever homeland military operation in peacetime. UK personnel are engaged in a major role over the winter months – supporting the NHS, central Government and local authorities, with others standing by if needed.

Members of the Armed Forces are helping the health service to roll out a COVID-19 mass vaccination programme. Defence Secretary Ben Wallace said he expects military personnel to be “doing injections” by February. The MOD has deployed 10 military planners to assist the Vaccine Task Force, with more than 150 personnel deployed across the UK to support organisational and logistical components of the Deployment Programme.

In Wales, there are 90 personnel supporting the operation of vaccine centres – 14 of whom are ready supporting the administering of injections. Mr Wallace has also put a 1,500-strong reserve force of medically qualified troops on standby to further help with the rollout of the coronavirus vaccines, should the NHS ask for assistance. If needed, a vaccine quick reaction force, which consists of 21 teams of six people, are standing by across the seven NHS regions in England.

About 12,000 personnel are being held at graduated readiness as part of the MOD’s Winter Preparedness Package and, as part of the Winter Support Force, troops have been helping launch a major community testing programme for COVID-19 in England. As of 8 January 2021, there were about 5,000 military personnel committed to assist with 56 open Military Aid to the Civil Authorities (MACA) requests. Since the beginning of the pandemic, the military has also assisted with mass coronavirus testing, setting up Nightingale hospitals and delivering PPE to frontline medical staff.

Scientists in laboratories on military sites have engaged in research, teams have been sent to tackle fake news and helicopter crews across the UK provided standby support to the NHS in the event they were required to transport medical staff and equipment or evacuate patients. 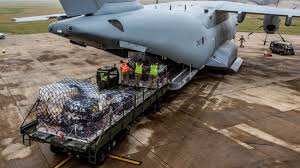 British military efforts in response to COVID-19 overseas falls under Operation Broadshare. This has included repatriation flights, delivery of vaccines and equipment, as well as logistical support. UK military personnel have delivered the first consignment of COVID-19 vaccines to Gibraltar.

A Royal Air Force A400M transport aircraft brought six cold cases of the Pfizer-BioNTech vaccine to RAF Gibraltar, enough for nearly 6,000 jabs. Vital medical equipment, including oxygen, medicine and PPE, was taken to the South Atlantic Islands on an RAF C-17 Globemaster aircraft. The military has worked alongside the Foreign and Commonwealth Office to bring home British citizens from countries such as China, Peru, Japan, Senegal, Nepal and Cuba.

The Royal Air Force helped rescue a team of conservationists stranded on one of the world’s most remote islands. Military assistance teams have also been deployed to the Turks and Caicos Islands and the Cayman Islands, the MOD said.